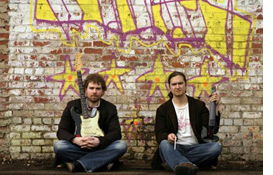 Where do Carnegie Hall and Beale Street meet? Right here, where The Reeds blend blues, pop and folk and send it spiraling in a new direction. Their new album, "Bleed Lust" (2008), brings back a classic blues vibe and blends it with smoky vocal hues and a 7-string violin; the result is an album that falls outside of musical boundaries and makes the rock feel good again.

With their inspirations ranging from Fleetwood Mac and the Eagles to Dave Matthew's Band and John Mayer, the Reeds have been playing music together for over ten years. Friends and fellow musicians since childhood, Josh Reid (guitars and vocals) and Ben Austin (electric and acoustic violins) share a Tyler-Perry / Jagger-Richards connection that is obvious both on stage and in their studio work. Over time, their sound has coalesced two voices into one and their music is a rare treat that attracts all listeners.

In 2004, Josh and Ben entered the studio and punched out their debut album, "Something for Sarah". The ten original songs were smooth and soulful and propelled them through the Atlanta/Athens music scene for several years. After adding two established musicians from the Atlanta scene, Craig Eck (drums), and Sean McPherson (bass), they sought a new sound, one more rooted in rock and blues and with a rich tonal signature all of their own. Their answer was "Bleed Lust" - a spectrum of eight pieces ranging from upbeat (check out "Whiskey Eyes") to downright bluesy (check out "Bleed Lust", the title track). Each song has its own light and offers layers of musical color built around just plain good songwriting.

The Reeds currently live in Athens/Atlanta, Georgia. Josh is a graphic designer and Ben is a graduate student at the University of Georgia. Craig works in retail and Sean runs East Atlanta Recording where The Reeds latest album was recorded.

© 2008 Joshua Reid and The Reeds. All Rights Reserved.